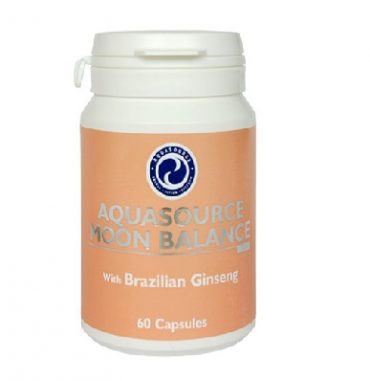 Moon Balance is a supplement designed by AquaSource specifically for women, to help sustain their good health during menopause. Everything you need to know is in the description below!

Pfaffia – a type of vine, growing in the South American jungle. They call it “Brazilian ginseng”. Pfaffia is an adaptogenic herb, which means that it helps the organism adapt to changes. It has been widely researched by Japanese and American scientists, which is why it has become so popular in these countries.

Mexican Sweet Potato – wild, discovered by Japanese scientists during 1936 in Mexico. Some islanders of Papua, New Guinea, consider it sacred and organize festivals in its honor. What is interesting, is that the menopause period is not a problem in this area.

Dong Quai – an herb used in China for thousands of years. It is popularly known as “female ginseng”. Because of its adaptogenic properties, dong quai is one of the most widely researched Chinese herbs. It keeps female organs healthy by assisting oxygen transportation in the blood.

Maca – another adaptogenic herb, assisting in the adjustment of the female organism to menopause. It helps the organism reach optimal tenacity during this challenging period.

Artiplex (salt bush) – a very tenacious plant, thriving in extreme conditions; adapts well and endures all kinds of climatic conditions. It is a rich natural source of chromium.

Lignans – contained in certain plant foods, such as linseed; they render positive effects on women during the menopause.

Vitamin C – necessary for the production of collagen – the protein which helps sustain soft and elastic skin – important factor during menopause. Helps keep the blood vessels in tact by improving blood flow. The intake of a sufficient quantity of Vitamin C through the food is crucial during this stage of life. Vitamin C is a powerful antioxidant, which means that it protects the cells from the harmful free radicals, produced by the organism as result of external stress, chemicals, and daily metabolic processes.

Vitamin E – widely researched because of its positive effects on the heart and blood flow. During the menopause years sustaining the health of the cardiovascular system is very important. Vitamin E maintains healthy blood and eases its circulation. Just like Vitamin C, it is a powerful antioxidant – protects from free radicals which damage the cells and tissue.

Ion Minerals – from the Great Salt Lake in Utah for a better cellular balance.

Microalgae AFA– for strengthening the effect of all the ingredients.

Digestive Enzymes – they are added, to ensure maximum absorption of the ingredients.

Two capsules should be taken daily during meals. The product ensures a quality mix of herbs and nutrients. Moon Balance is especially created for helping the female organism adapt easily during the menopause period. It sustains the good health and vitality of women during the constant changes during this time.

Appropriate foods – a good diet is crucial for the adaptation of the organism to the physiological changes during menopause.

Regularly consume wholeseed soy foods like tofu, tempeh, green soy seeds and organic, non-saturated soy milk. It is well known that Asian women have an easy and light transitional menopause period, and this is owed to an extent to the large amounts of soy they consume. It is rich on isoflavonoids and phytoestrogens, which are considered to be healthy especially during menopause.

Reduce the intake of alcohol and food containing white flour and sugar to a minimum.

Physical exercise – the physical activity raises blood and oxygen inflow, which accelerates metabolism. As a result energy and mood are raised. Sweating is very beneficial, since sweat throws out toxins. Moving is also an effective way to reduce stress, which has a devastating effect on hormones.

Be the first to review “Moon Balance for Women” Cancel reply